Grace Episcopal Church, founded in 1871, is a parish with deep roots in the Syracuse community–a parish long known for diversity and inclusiveness, and for “Friendship and Service,” as emblazoned above the parish house entrance. Grace’s history provides abundant evidence of God’s presence in our midst.

For additional history, please see the linked documents at the end of this page. 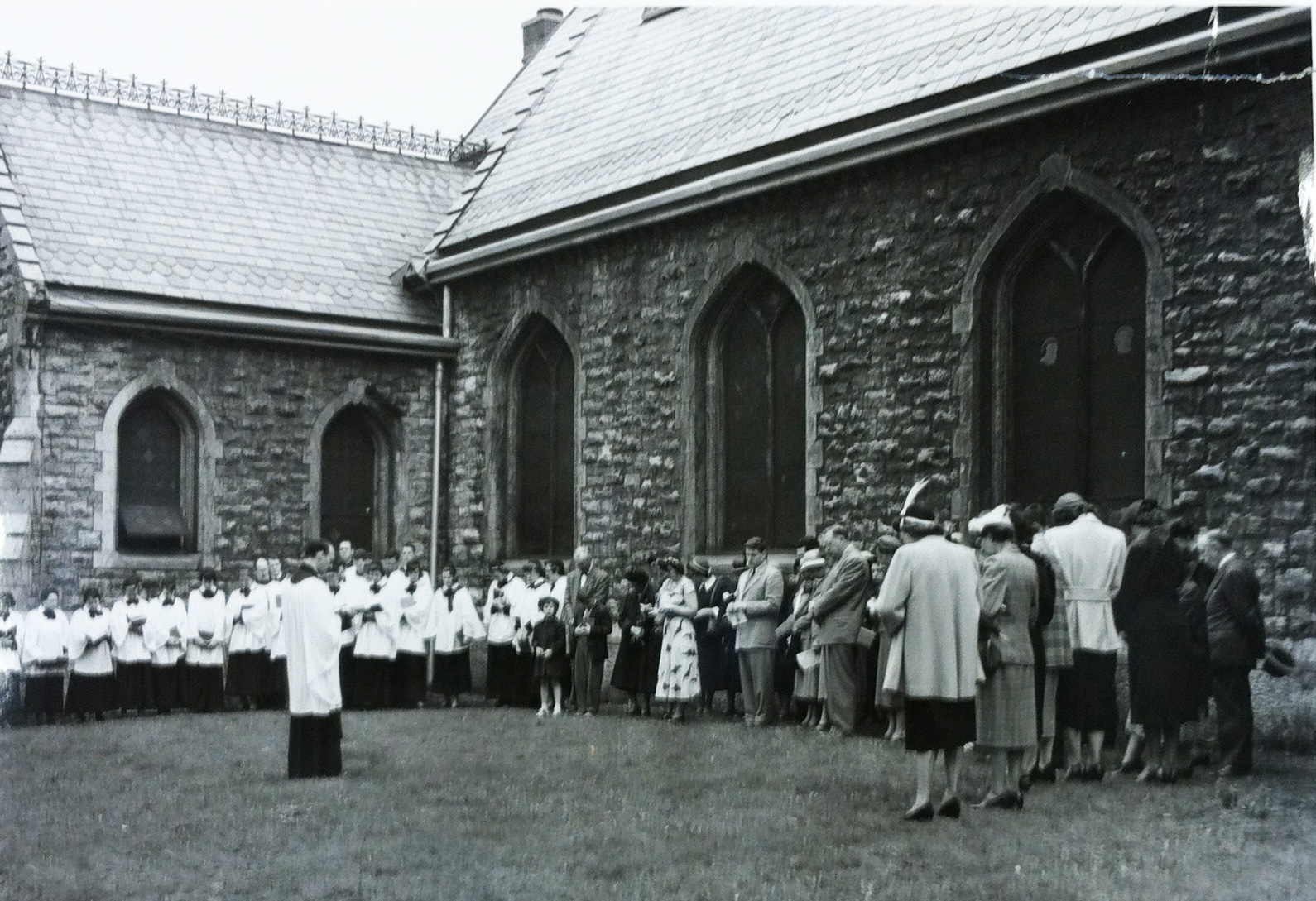 Grace Church was established as a mission in 1870, two years after the creation of the Diocese of Central New York and during  the same year that Syracuse University was founded. A small frame church was erected at the corner of Madison Street and University Avenue within the growing east side of the city. Within a year, on March 27, 1871, Grace Church was organized as the diocese’s fourth new parish. Within five years, the parish had grown to the extent that a new building was warranted.

In 1876, the Diocese received a substantial gift from the Schermerhorn family of New York City for the new Grace Church building. The architect, Horatio Nelson White (1814-1892), was one of the most prominent in the region whose designs included the Syracuse University Hall of Languages (1871-73) at the head of University Avenue. The cornerstone for the new Victorian Gothic Revival-style building was laid in 1876, and it was completed the following year. The building underwent a number of interior renovations over the years, but only one major exterior alteration. In 1940, the upper two stages of the tower were taken down due to structural issues. Noted local architect Melvin King designed the parapet on the lowered tower. 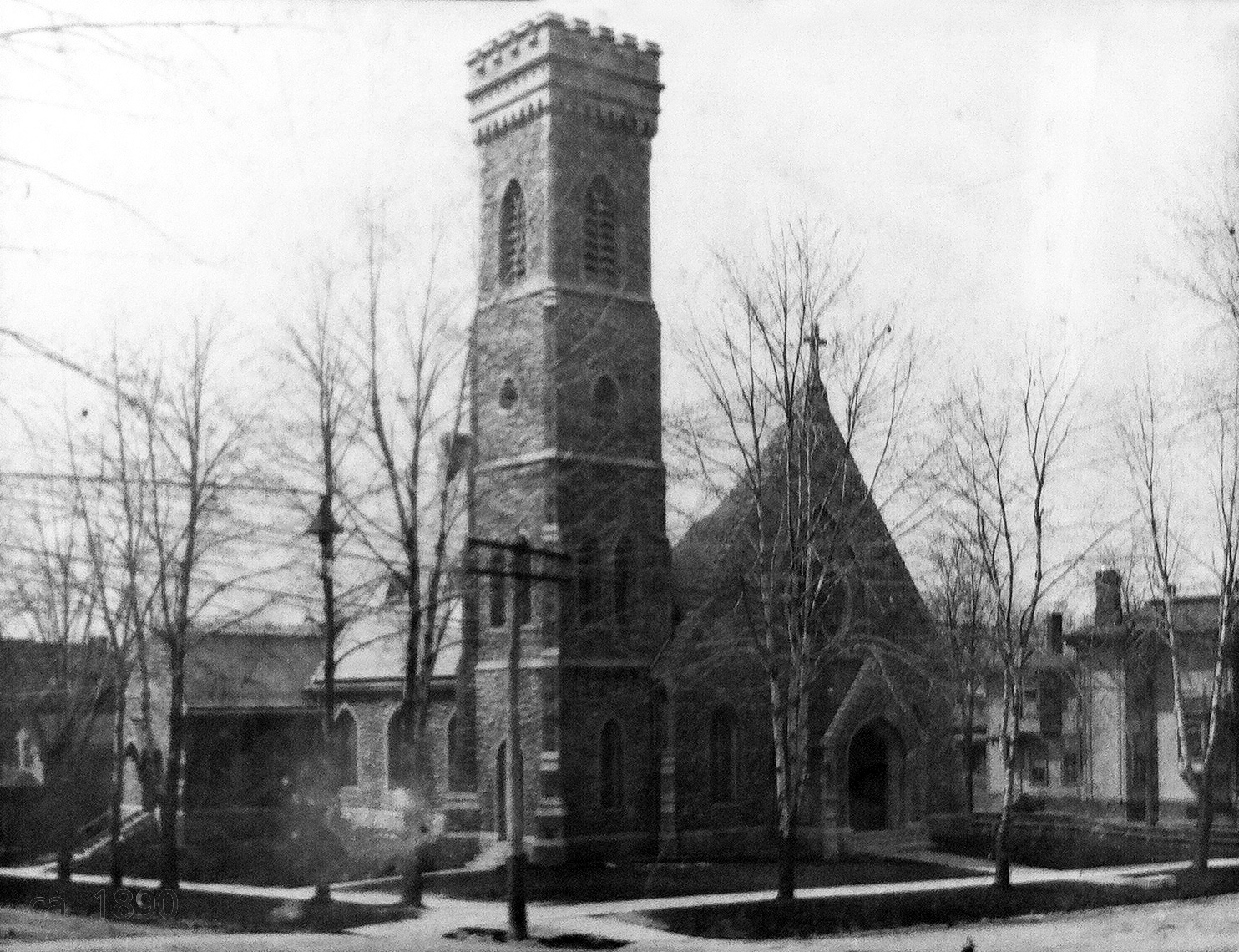 The parish house was added in 1916-1917 on the lot to the west occupied by a frame house, to provide a large auditorium, parlor, kitchen, offices, and classrooms, with recreation space in the basement that included a bowling alley. The building was designed by Justus M. Scrafford (1878-1947), a Beaux-Arts trained professor of architecture at  Syracuse University.  Scrafford’s design reflected the Gothic style of the church, complete with a crenelated parapet that evoked the one on the church tower. His design also showed influence of the Arts and Crafts Movement in the pebble-dash stucco and interior woodwork. 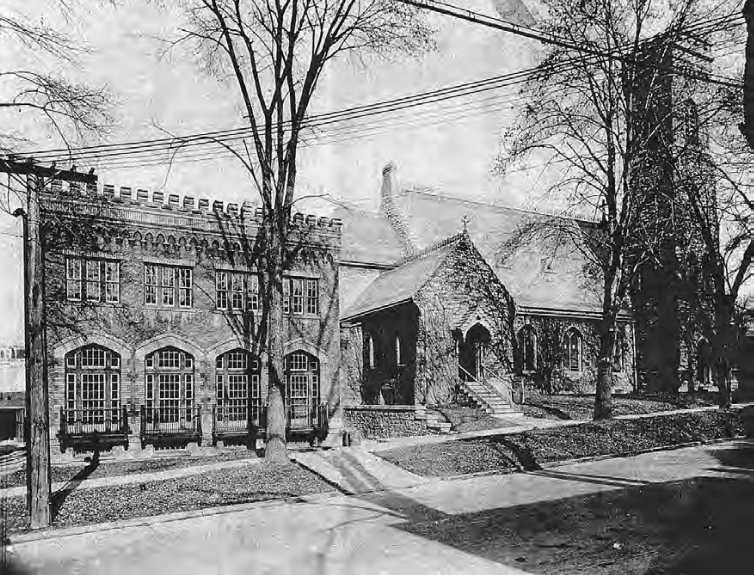 The Welsh Garden is a place of quiet contemplation that contains the remains of Grace parishioners. It consists of two former residential lots to the north of the church that were acquired in the 1960s after the houses were removed as part of the city’s widespread urban renewal efforts. Another residential lot west of the parish house was acquired for parking. The garden is named in memory of Grace’s longest-serving Rector, Walter Welsh and his wife Marie, whose remains are interred at the cross at the center of the garden. 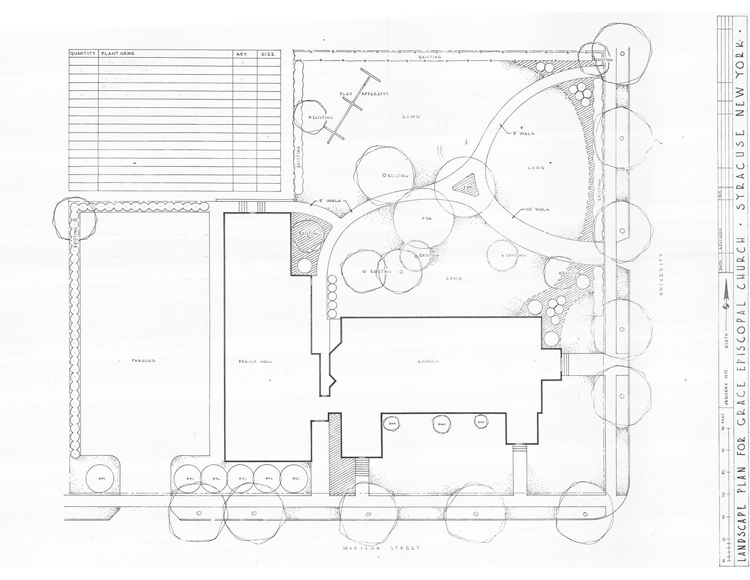 Under the leadership of Rev. Dr. Herbert Coddington, Rector of Grace Church during the early 20th century, the parish grew its outreach to the sick, poor, and troubled. Coddington ministered to Syracuse’s African-American community in the nearby 15th Ward, which led to the opening of St. Philip’s Church on Almond Street in 1922. 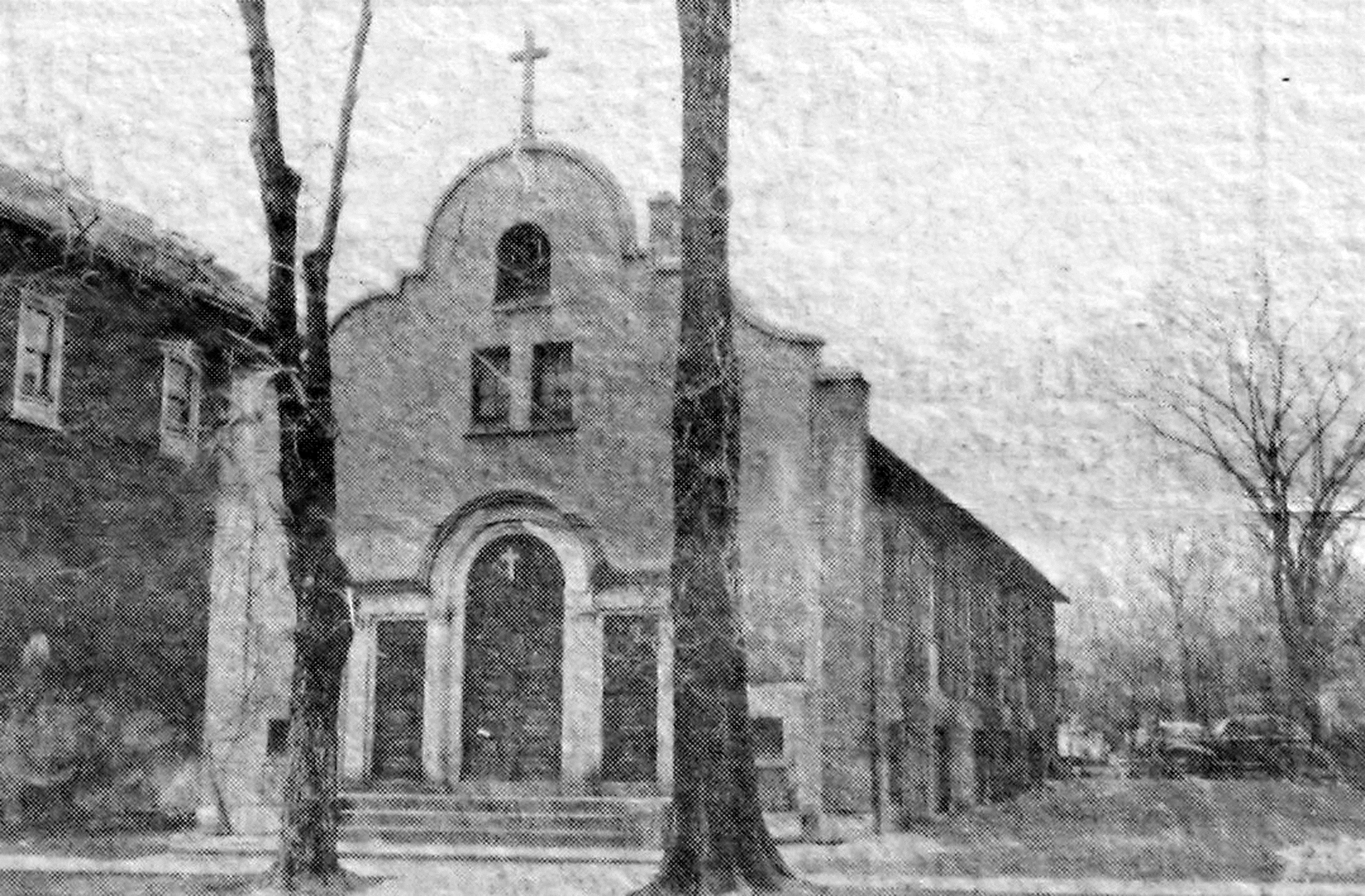 Grace Church, built on the homeland of the Onondaga people, recognizes the complexity of its past association with indigenous people, notably David Pendleton Oakerhater (ca. 1847-1931), a Cheyenne from Oklahoma.  In 1878, Oakerhater was baptized at Grace Church and ordained a deacon there in 1881. After release from a federal prison in Florida, he was brought to Central New York under the sponsorship of Episcopal deacon, Mary Douglass Burnham.  His home parish was St. Paul’s Episcopal Church in Paris Hill near Utica. Oakerhater returned to Oklahoma after his ordination and  devoted his life to serving his people and the Episcopal Church. In 1992, Oakerhater was elevated to sainthood. Grace Church is the national shrine to Saint Oakerhater – the first Native American Episcopal saint. 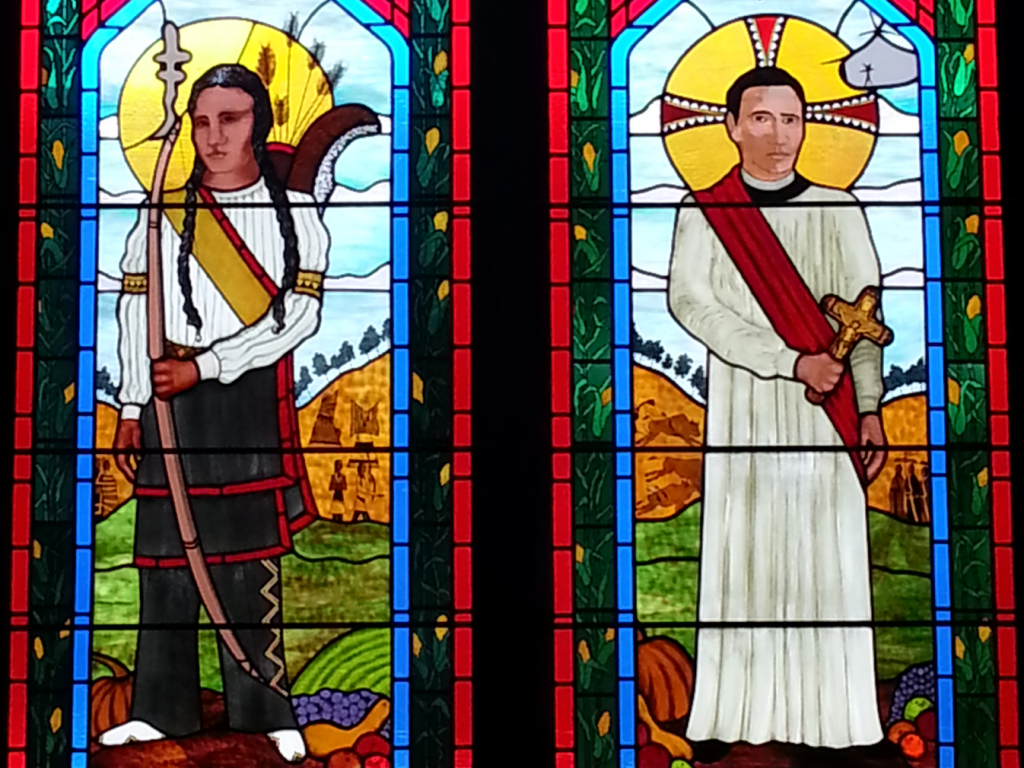 Rev. Walter N. Welsh, who began at Grace in 1949 and served through the 1970s, led the parish through tumultuous times of racial integration and urban decline. He welcomed the members of the historically black St. Philips Episcopal Church on Almond Street, which was lost to urban renewal and closed in 1957.  The diverse parish that resulted was one of the first fully integrated Episcopal parishes in the country. The spirit of St. Philip’s lives on at Grace today. 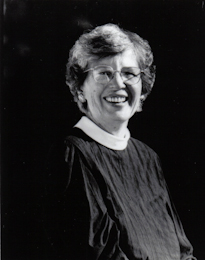 During the late 1960s, Betty Bone Schiess (1923- 2017) worked with the Syracuse National Organization for Women chapter to reform the Episcopal church. In 1974, she sparked national controversy as a member of the “Philadelphia Eleven,” eleven Episcopal women who were ordained as priests in Philadelphia. It was considered an act of disobedience since the church hierarchy had not yet consented to the ordination of women. She later became an associate rector of Grace.

In the 1960s, Grace led the city’s churches in its commitment to civil rights, and Grace was also a meeting site for the Congresses for Racial Equality. During this same time, the church provided a home to one of the first Head Start programs, and offered training for the Peace Corps and Vista volunteer programs. In recent years, Grace has been active members of the Alliance of Communities Transforming Syracuse (A.C.T.S., www.acts-syracuse.org), an interfaith advocacy group that works for social justice in Onondaga County, and has taken a leading role in the movement to end solitary confinement for incarcerated youth in Onondaga County.

As the cause of LGBT equality gained public attention in the latter 20th century, Grace Church served as a welcoming and affirming congregation, especially under the leadership of Father James Taylor in the 1990s. In 2008, Grace Church led the Diocese of Central New York in LGBT activism, participating in the CNY Pride Parade and Festival. That same year, the Rev. Peter Williams, a member of Grace and an openly gay priest, was received into the Episcopal priesthood from the Roman Catholic tradition.

Parishioners and friends at a demonstration at Grace against youth encarceration, 2016. (Church archives)