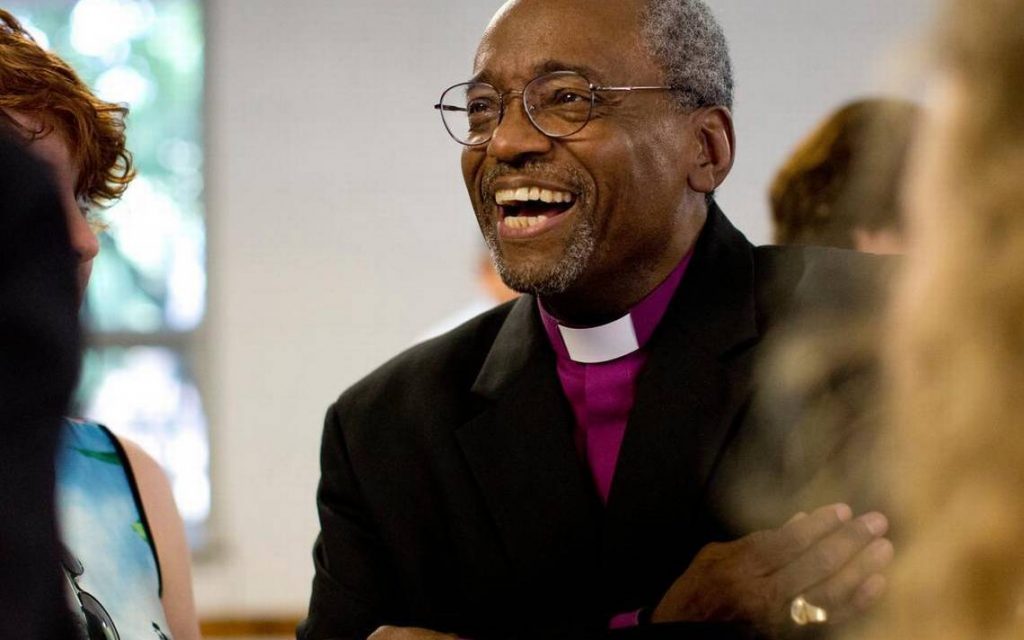 We look forward to a wonderful Sunday morning with our Presiding Bishop, celebrating Eucharist and introducing him to the beauty that is Grace Church and it’s people.

**UPDATE** If you plan to attend, please be sure not to park in the parking lot next to ours that is owned by the Genesee Grande Hotel. You will be subject to tow. Please look for parking on the streets, or in nearby parking garages. Thank you.

If you’d like to learn more about our Presiding Bishop, we’ve posted his bio from The Episcopal Church website

Born in Chicago, IL, on March 13, 1953, Presiding Bishop Curry attended public schools in Buffalo, NY, and was graduated with high honors from Hobart College in Geneva, NY, in 1975. He received a Master of Divinity degree in 1978 from Yale University Divinity School in New Haven, CT. He has furthered his education with continued study at The College of Preachers, Princeton Theological Seminary, Wake Forest University, the Ecumenical Institute at St. Mary’s Seminary, and the Institute of Christian Jewish Studies. 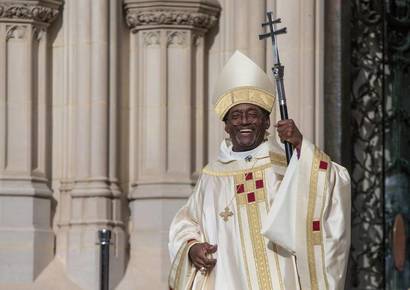 Presiding Bishop Curry was ordained to the diaconate in June 1978, at St. Paul’s Cathedral, Buffalo, NY, by the Rt. Rev. Harold B. Robinson and to the priesthood in December 1978, at St. Stephen’s, Winston-Salem, NC, by the Rt. Rev. John M. Burgess. He began his ministry as deacon-in-charge at St. Stephen’s, Winston-Salem, in 1978 and was rector from 1979-1982. He next accepted a call as rector at St. Simon of Cyrene, Lincoln Heights, OH, serving from 1982-1988. In 1988 he was called to became rector of St. James’, Baltimore, MD, where he served until his election as the 11th Bishop of the Episcopal Diocese of North Carolina in February 2000.

Throughout his ministry, Presiding Bishop Curry has been active in issues of social justice, speaking out on immigration policy and marriage equality.

In his three parish ministries in North Carolina, Ohio, and Maryland, Presiding Bishop Curry had extensive involvement in Crisis Control Ministry, the founding of ecumenical summer day camps for children, preaching missions, the Absalom Jones initiative, creation of networks of family day care providers, creation of educational centers, and the brokering of millions of dollars of investment in inner city neighborhoods.

In the Diocese of North Carolina, Presiding Bishop Curry instituted a network of canons, deacons, and youth ministry professionals dedicated to supporting the ministry that happens in local congregations. He refocused the Diocese on The Episcopal Church’s Millennium Development Goals through a $400,000 campaign to buy malaria nets that saved over 100,000 lives.

Presiding Bishop Curry has served on the boards of a large number of organizations, including the Task Force for Reimagining the Episcopal Church (TREC) and as Chair and now Honorary Chair of Episcopal Relief & Development. He was a member of the Commission on Ministry in each of the three dioceses where he has served.

Presiding Bishop Curry has a national preaching and teaching ministry, having been featured on The Protestant Hour and as a frequent speaker at conferences around the country. He has authored numerous publications including columns for the Huffington Post and the Baltimore Times. His most recent book, Songs My Grandma Sang, was published in June 2015; Crazy Christians: A Call to Follow Jesus was his first book, in August 2013. He has received honorary degrees from Episcopal Divinity School, Sewanee, Virginia Theological Seminary, and Yale.

He is married to the former Sharon Clement, and they have two daughters, Rachel and Elizabeth.